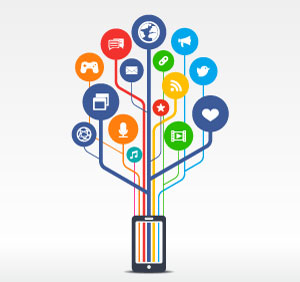 How do you prefer to chat? If you’re like most users today, you’re doing most of your connecting on your mobile phone. Recent research from Pew Research confirms that users are connecting with Facebook, Twitter, and Instagram primarily over mobile devices. Pinterest is an exception, with the highest desktop use of the four—not surprising given the visual nature of the content.

What does all this tell us about messaging over social media?

Facebook’s little cousins, on the other hand, were made for the small screen. They make do with a snapshot and a caption. They scroll by and invite sharing with thumbs alone. They don’t care who you are, and they don’t demand much more than a look and a click.

Our attention spans had been short before mobile came into our lives, and now, forget it. Twitter gave us the 140 character tweet, and its newer cousins don’t even need all those spaces. I think part of the reason Twitter holds its own is its modest demands. We like a social media that knows its limits.

If going mobile has reduced our mental screen size, it has also introduced a new layer of distraction. Research shows that most users are engaging with social media over their phones while doing something else, so whatever nano span we had before is now split in two (or three). Today’s consumers are highly distracted and distractible. That could be a good thing for clicks, by the way.

Because we’re socializing on our phones, and our phones go everywhere, social media are more personally connected to us than ever before. They’re more integrated into our lives. They’re with us while we’re shopping, walking, exercising, and waiting in line for our morning coffee. Sharing experiences, posting reviews, shopping for better prices or new deals are all just a swipe away. As a result, social media is as much a personal companion service as a means of connecting with distant friends and relatives or compiling a personal scrapbook.

Call it the age of puppies and snark. Social content that gets traction today is above all entertaining. In a world dominated by images, information is not king. On social media, we’re looking for a quick laugh or an instant emotional response. Or in some cases a coupon on demand. Social media (apart from blogging) has more in common with a circus than a news channel.

What does this mean for your social media efforts?

One, it’s a visual culture. Imagery is king. Copy is a caption or a quip, an adjunct to the main attraction.

Two, be funny if you can, and if not, go for the heartstrings.

Three, let’s make a deal. People connect with brands for deals. Offer them.

Four, go where your users are. Offer deals whenever your customers are looking for them, which is likely to be while they’re in the checkout line, or in the parking lot, or in your competitor’s store shopping deals. A targeted PPC campaign can aim for the right targets to get you there.